Protests of Flossmoor police shooting spread to Homewood board meeting

Protesters condemning the July police shooting of Madeline Miller — normally seen at Flossmoor board meetings — spoke during the Homewood Village Board meeting on Tuesday, Sept. 27. They called for Homewood elected officials to implement new programs they say are being disregarded in Flossmoor. While Flossmoor board members have[Read More…]

The big ticket item on the Homewood Board of Trustees agenda for Tuesday, July 12, is the purchase of a new ambulance for $380,000. The new rig would replace a 2015 model. The board will also consider an ordinance authorizing the village to donate recovered bicycles to Restoration Ministries in[Read More…]

The Homewood board of trustees approved a request for approximately $69,000 of motor fuel tax funds to be allocated for supplemental street salt to meet the village’s ongoing needs. The most recent snowfall — 10.7 inches according to the National Weather Service — proved a challenge to the village in[Read More…] 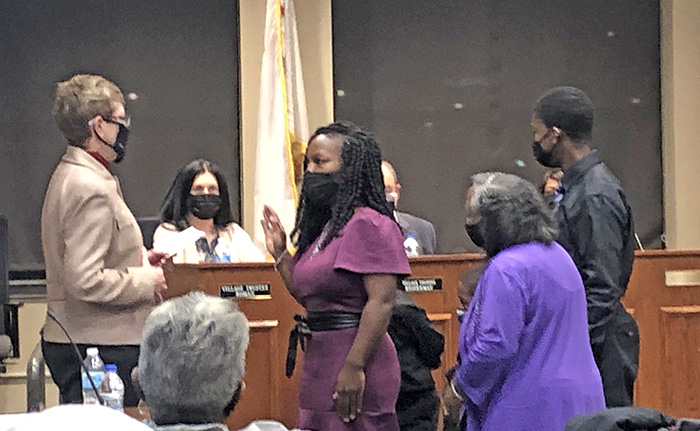 Homewood Village Board approves appointment of CeCe Belue as trustee

A new seafood restaurant and delivery service had a parking variance approved by the Homewood village board Tuesday. Crab Bagz plans to open at 18681 Dixie Highway, formerly the location of Lily Pad resale store. The building also contains Salon Life and Barton Chiropractic. The restaurant will move into a[Read More…]

The Homewood village board approved a second round of relief for local bars and restaurants affected by Gov. J.B. Pritzker’s executive order restricting on-site eating.  The village will not ask businesses to pay the “places for eating tax” for November, December or January. Homewood approved a similar measure in the[Read More…]

Homewood expects to raise real estate taxes by 4.8 percent, Finance Director Dennis Bubenik explained to the village board Tuesday, Oct. 27.  The total 2020 property tax levy for village operations, pension obligations and debt service would increase 5.4 percent to $6,737,322. The village is one of several bodies, including[Read More…]

Owners of two proposed businesses will have requests on the Homewood Board of Trustees agenda during its regular meeting Tuesday, Oct. 27. The board will also hear a presentation on the draft 2020 real estate tax levy and consider ordinances to formally establish a downtown TIF district. Zenovia Love is[Read More…]

Homewood approved a contact to repair the exterior facade of a water plant at the Aug. 25 village board meeting. The work will include tuckpointing, wall repairs, wall demolition, concrete block replacement, brick replacement and caulking. The village contracted Structural Technologies of Bloomingdale to assess the scope of the project[Read More…]

Homewood trustees Tuesday commended both residents and police for their support of ongoing demonstrations in response to the death of George Floyd and in support of the Black Lives Matter movement.  “Despite the gamut of negative emotions that I and many others have experienced based upon what happened, I am[Read More…]