For the second straight Flossmoor Village Board meeting, public comment was dominated by criticism of the village’s police department and demands for administrators to do more in the wake of Madeline Miller’s death. Miller was killed July 10 by police responding to a report of a domestic disturbance at 1437 Joyce[Read More…]

Family of Madeline Miller ‘devastated’ by her death in police shooting

A group of protesters filled the sidewalk outside Flossmoor Village Hall for a second time before the board meeting Monday, Aug. 1, calling for police accountability in the shooting death of Madeline Miller. Some of Miller’s 10 siblings also attended the protest that later continued into the Flossmoor Board of[Read More…]

Provided News The Village of Flossmoor canceled its National Night Out event on Tuesday, Aug. 2. In an online message to residents, organizers said the event was canceled out of “concern among law enforcement.” “The village places a high priority on providing safe, family-friendly events that bring us together as[Read More…] 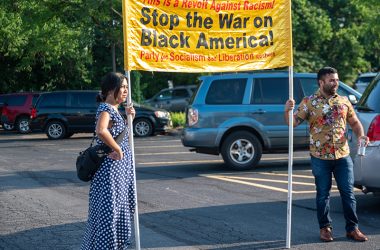 While the Flossmoor Village Board had nothing on its agenda Monday, July 18, related to the death of Madeline Miller — who was killed July 10 by police responding to a report of a domestic disturbance at 1437 Joyce Drive — local residents, an activist and a family member all spoke about[Read More…]

The Flossmoor Police Department issued a statement Monday evening appealing to the community for patience as the Illinois State Police Public Integrity Task Force investigates an officer-involved shooting on Sunday that took the life of a 64-year-old resident. Madeline Miller was pronounced dead at 1:09 p.m. Sunday after she was[Read More…]