Charges were filed Friday against the 21-year-old driver of a Porsche that was involved in an accident that resulted in the death of an Indiana man last summer, according to a Homewood Police statement. Lindsey Anderson, of Homewood, was charged with aggravated DUI involving death, reckless homicide, aggravated unlawful use[Read More…]

Business damaged, possible injuries in collision at Ridge and Dixie on Saturday 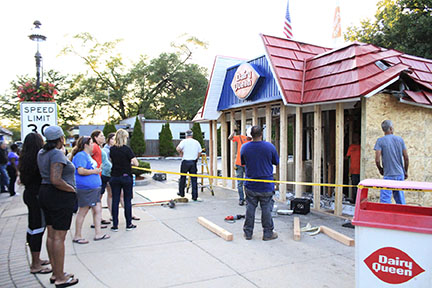 Welsh family: Homewood DQ will rise from the rubble

While DQ fans gather to watch, owner Kevin Welsh   and crew work into the evening to secure the   building after it was heavily damaged in an early   morning crash. (Photo by Eric Crump/H-F Chronicle)  On Tuesday evening, Kevin Welsh, owner of Dairy Queen, and his crew met at the[Read More…]