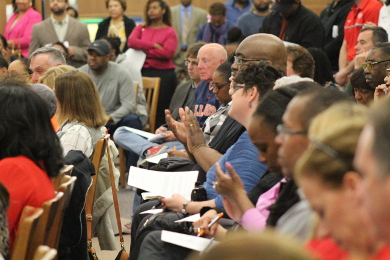 An audience of about 150 people gave applause to speakers who admonished those that have caused divisions within the Homewood-Flossmoor High School community the past 10 months and said now is the time for healing. You’ve reached subscriber-only content Register for free to continue reading  Free 3-day trial Already a subscriber?[Read More…]

The District 233 school board election is past, but tensions continue between supporters and opponents of the current board and administration. Two petitions circulated this past week to register support for positions held by both sides. The District 233 school board will be taking action on 2017-18 salaries for district administrators at[Read More…]

The Homewood-Flossmoor High School school board officially terminated the contract of former principal Ryan Pitcock, despite pleas for his return. The 6-1 vote was described as confirmation of “the termination of the principal, Ryan Pitcock, by exercise of the buyout clause in his employment contract, effective June 21, 2016.” Pitcock[Read More…]

September 22, 2016 by admin Comments are Disabled